Lian Ping Zhang and I met in Houston. We practiced in the mornings, near the Outpatient Cardiac and Pulmonary Facility in Houston that I directed during the years of late 1998 - 2001.

6 am, at a park that was part of the University of Texas Recreation Center in Houston. Lian Ping Zhang would come up the path around sunrise, spinning his staff, normally I was already there posting Zham Zhuang. 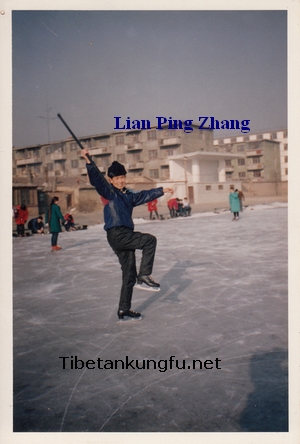 Many times, 5-9 people who spoke Manderin, would come with him. They lived in an aparment complex near the park. He would come by and sit on picnic table and watch me practice, posting, Hop Gar, Hsing Yi, Yi Chuan, Guang Ping Tai Chi, and Ba Gua.

I would say, "come practice with me" and he would "no, that is too hard". Then he would invite me over to practice the Yang 24, Yang 48, varities of Ba Gua, Staff, Sword, and other forms of Chi Kung and Kung Fu.

Usually one of the ladies would step out of the group, get her bamboo flute and start playing while we practiced, it was always special.

Lian Ping and I became friends over the years, his English was not very good, and Manderin was not existent with me. So we decided to help each other.

My first lesson came while using the Long Staff, he was working with me, and he would pop my hand, elbow, shoulder very soundly, and say firmly "Bu".

I realized after a few slaps that it meant "No". Of course, that didn't mean I knew what I was supposed to do, just, that wasn't it. So through the process of elimination and lots of slaps, we would help each other.

Lian Ping Zhang gave me my first staff, my first heavy staff, we had lots of fun practicing. Lian Ping taught me the Long and short staff, many training exercise techniques in Bagua.

He would come watch when local young bucks would come out to the park and challenge me in sparring are no rules push-hands. The 4 times that happened, he would watch, I came out on top each time, and he would pat me on the back telling me "Hen Hao", which later I found out means "real good" or a compliment like "well done".

Though we helped one another, neither was a Sifu over the other, we enjoyed the morning group practice. We would take a few minutes each morning and draw a chinese character in sand with our staff (Click here to see the park).

Then he would say it Chinese, then I would say it in English, and it was our word for the day. Lian Ping was struggling to find a job, he was working in a local Chinese Resturaunt, but wanted something in his field, Wu Shu and Gymnastics. He had taught for years at the Shanghai Sports University.

One day Lian Ping brough me his draft of his cover letter: 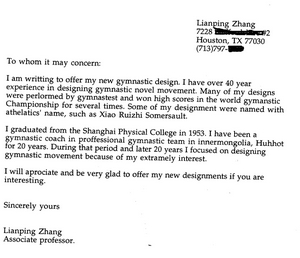 As you can tell, it needed work, and I helped him rewrite it. As I was teaching a staff workshop recently, I thought about Lianping Zhang, the work that we did together during those years. It isn't often you get to meet genuine folks such as Lian Ping Zhang.

Categories Posted in Chinese Martial Arts , Kwoon , Style: Tai Chi
- Genre Label
** You can Listen to The Latest Podcasts on the Self Updating Stitcher Player