Brought The Martial Art, Tai Chi Chuan to the US in 1960's 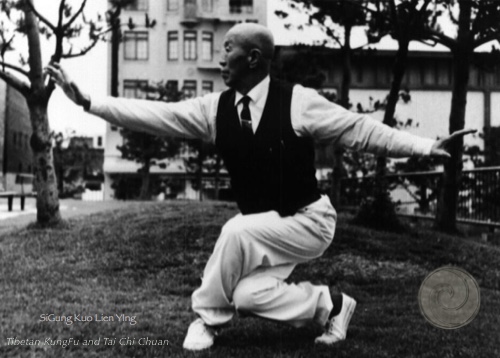 Tai Chi Chuan must contain the 8 forces.  These 8 forces in the old classics were not necessarily a particular posture, The 13 movements include the 8 Pa Qua gates, and the 5 Hsing I footwork.

and because several of the old masters refused to teach out the subtleties that made Tai Chi Chuan work, (this softer style is modernly referred to as the Bejing Style and we see it popularized with groups in the park).

Kuo Lien Ying brought Quang Ping Tai Chi Chuan with him, and it physically explains many of the classics, not just intellectually (talking hands).

Kuo Lien Ying brought the Tai Chi with him in 1960's to San Fransisco. The expectations of this old Yang style from Quang Ping Province are high, encouraging physical development, martial skill and sensitivity.

There are several similarities between the Yang Martial Tai Ji Chuan and the Chen Canon Fist. Both in distint postures or in Jing (power expression) normally not seen in softer health version.

Softer Beijing Yang Styles are used to promote the health benefits, has its place and is excellent. Most of our students, once exposed to springy, old style Tai Chi Chuan from Quang Ping and Yang Ban Ho, prefer it, even though it is much more demanding and challenging.

There is a Tai Chi Qi Gong for health and then there is the original Combat Martial Art.

Categories Posted in Chinese Martial Arts , Style: Tai Chi
- Genre Label
** You can Listen to The Latest Podcasts on the Self Updating Stitcher Player