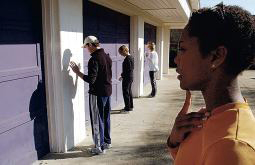 Chi Running -- a combination of tai chi and running -- is gaining converts in the Triangle. Raleigh Pilates instructor Charman Driver heard about it from a client who had been on a trip out west. Kathy Lawrence of Hillsborough got wind of it from her spin bike instructor. Steve Hoge watched in amazement as a new member of his Chapel Hill/Carrboro trail running club used it to glide effortlessly through a run.

All three were intrigued by ChiRunning's promise to cut down on injury. What they learned was so different from the way most of us run that it was almost like anti-running: To go faster, you find the path of least resistance and relax rather than tighten your leg muscles. Instead of pushing your body forward with your legs, you harness the power of gravity and let yourself fall into each step. The mind, not the body, does most of the work.

If all of this sounds a bit Californian, that's because ChiRunning's creator is Danny Dreyer, a nationally ranked ultramarathon runner based in San Francisco. Dreyer, who has run marathons of up to 100 miles, was studying with his tai chi master when a light bulb went off in his head: Why not apply tai chi's concepts -- moving from one's center and letting the arms and legs follow -- to running In 1999, after some trial and error, ChiRunning was born, said Katherine Dreyer, Danny Dreyer's wife and co-author of their 2004 book, "ChiRunning: A Revolutionary Approach to Effortless, Injury-Free Running." Since then, thousands have changed their running form and become ChiRunning devotees, according to the Web site at www.chirunning.com.

Driver, 34, has been running since she was 15. She started with track and moved on to 5Ks and marathons. But when she hit 30, the knee twinges started. She changed shoes, but the pain always returned in a few days. When one of her Pilates clients told her about ChiRunning, which, like Pilates, uses the body's core muscles, Driver got the book and the DVD.

"I was blown away," she said. "I've never experienced anything like it. When you run track, you learn a technique. It's a burst of energy. You're using every muscle in your body to get yourself to the end. With ChiRunning, it's not about using those small muscles. He's saying, 'Let's use that powerhouse we know about from Pilates.' "

Driver went to California to become a certified ChiRunning instructor. Recently, she started teaching the technique to people in the Triangle. Sunday, a group of nine gathered at the Broughton High School track in Raleigh for their first ChiRunning lesson.

In a wax-on, wax-off kind of way, Driver led the class through a series of exercises for most of the hour, before allowing them to step foot on the track. They learned to tighten their stomach muscles, and to tilt their upper bodies precisely a quarter of an inch forward. They learned to hold their torsos perfectly straight, like steel, and to relax their limbs, like cotton. They pushed against a wall to get used to the sensation of letting gravity pull their bodies forward. They learned to land in the middle of their feet.

They learned about chi, the immeasurable life force that the Chinese have been studying for thousands of years, and how to keep it flowing. When they were finally ready to take off, Driver reminded them to get into their best posture.

After a lap or two, Lynne Harris of Raleigh said, "It feels different. It's a little overwhelming. Is my stomach tight? Are my arms moving the right way? But it felt good. It wasn't as much effort, physically." She plans to stick with the program in hopes of breaking some bad habits and easing her chronic Achilles tendinitis.

Lawrence, 44, started ChiRunning in December. The shin splints that she often had to treat with ice and ibuprofen are gone. Because her legs don't hurt anymore, she runs five miles twice a week. She's lost 10 pounds.

Still, ChiRunning isn't easy. Core muscles get sore. "It takes a lot of concentration," she said. "I can't think about anything else, or I lose my form and I have to stop."

Robin Queen, coordinator of sports biomechanics at Duke University's Michael W. Krzyzewski Human Performance Lab -- or the K-Lab -- said that improper form is the biggest contributor to running injuries. "Everyone assumes you put one foot in front of the other, and that's all there is to it," she said. Most of what she'd heard about ChiRunning sounded good, she said, especially the emphasis on core muscles and stretching. "If your core is strong, that keeps you in better balance," she said.

People often get injured when they start running too far, too early. "Pay attention to how your body is responding," she said. "If it hurts, don't do it."

Sixty-five percent of runners will become injured in an average year, according to a study reported in Medicine and Science in Sports and Exercise. Jonathan Chang, a clinical assistant professor of orthopedics at the University of Southern California and a fellow with the American College of Sports Medicine, said it remains to be seen whether ChiRunning reduces injury rates. But if you're using a larger number of muscles to run, then potentially, you'll do less damage to your legs.

Competitive athletes will probably need to stick with "power running" techniques that focus on leg strength, said Chang, himself a former competitive marathon runner. But those who are running for fitness might find ChiRunning appealing, because it's something different.

Driver said that it took her five months to really get ChiRunning. "It's a gradual process," she said. Since then, she's come to believe that chi, or energy, flows through your body.

"It's not about how fast you can run, or how strong you are," she said. "It's about being able to run ... without injury. I know I can do this the rest of my life, because I'm doing it the chi way."