Cortisol is a hormone, that is very important to human function. The adrenal glands secrete cortisol and part of the endocrine system. Anatomically the adrenals sit on top our kidneys. A main effect of cortisol is to reduce the reserves of protein in all body cells except cells of the liver and gastrointestinal tract. It also makes fatty acids available for metabolic use. Cortisol is referred to as the 'stress hormone' because it is released with prolonged or intense stress. 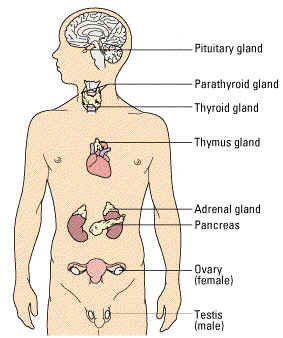 Cortisol is involved with the following systems:

Cortisol is present at higher levels in the mornings and lower levels at night in most healthy adults. The 'stress hormone' cortisol is released with stress and 'fight or flight' situations. The yin and yang properties of cortisol have been and are continuing to be studied. For example, low gentle release of cortisol has positive effects of:

With chronic higher levels, the negative effects of:

Recently at UCLA, in the Journal of Brain, Behavior and Immunity the study 'The Mechanism Behind Mind-Body Connection' was published in the May Issue. In the study they reported that all living cells have a clock called a 'telomere'. Each time the cell divides the telomere gets shorter. Having many cells with short telomere (short clocks, thus dividing and dying rapidly), has been scientifically linked to diseases such as: 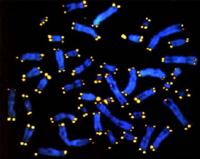 In this photograph, you can see the chromosones of an immune system cell, the chromosone is colored blue. The yellow cap on the ends is the the telomere.

This Mind Body Study  shows the link between the power of your mind, to manage and reduce your stress, learning to relax and let go, as compared to those who do not. It explains why people who are under stress gets sick more often, with a variety of health care problems.

Every student with us at Tibetan Kung Fu and Tai Chi Chuan is taught and encouraged to practice calming the Heart - Mind (Yi). We know through personal experiences that the benefit of calming the mind, soothing the heart, and smoothing our chi is beneficial for ourselves and those we are around. If you want to read further how Cortisol is reduced through meditation.

Categories Posted in Mindfulness - Attention , Style: Tai Chi
- Genre Label
** You can Listen to The Latest Podcasts on the Self Updating Stitcher Player