and practicing QiGong and Kung Fu for a very long time. Master Chin has a reputation of teaching kung fu so that all students benefit and have the opportunity to develop in all aspects of mind and body.

I looked for a teacher of the Chinese Martial Arts back in the late 80's and early 90's. It took a while. Along the way I was told "If you are looking for a Kung Fu Teacher, you will not find any better than Sifu David Chin.

Often sought out due to his skills and experience, he has developed a loyal following, because his understanding of Tibetan Hop Gar, HsingI and other Kung Fu is incredible.

Most of my classmates were active military at the time, even though they had access to Martial Arts on Bragg Army Base, they chose to spend their time and money with Sifu Chin. That was something which impressed me. Those young men were often deployed in dangerous situations, and they intuitively knew what would work in the field and what was for show, health or sport. They had no time for the sort of training that didn't serve their needs, and Sifu Chin didn't teach for sport or show. When he worked us it was for improving health, understanding where the kungfu came from, and a practical understanding of Chinese Martial Arts for combat. 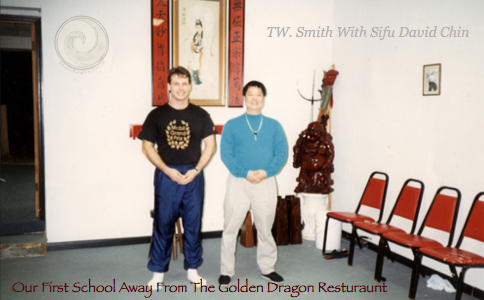 Known for his internal power, ability to fight and teach students to rise to new levels, it is ability to take any level student, beginner, handicapped, and elderly and help them develop is part of his skill.

Master Chin would credit much of his understanding of the Chinese Martial Arts to a few areas, one is Master Kuo Lien Ying and Master Ng Yim Ming (Harry). This combined with his real world experiences and practice he has polished the understanding of Tibetan Hop Gar Kung Fu.

Master Chin taught at his school in Fayetteville, where most of the students trained heavy for full development. After we spent a few years at the Golden Dragon Resturaunt training, Sifu Chin got a space on Bragg Blvd. It was our first space outside the Golden Dragon, (that's us in it on the right). After a year or so, we moved back to the Golden Dragon. There were not many of us at the School on Bragg Blvd, Rick, Brian, Davey, Kevin, Paul, George to name a few. 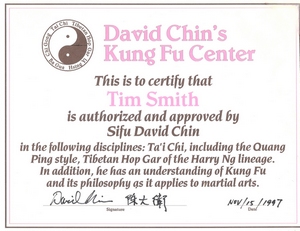